Have an Apple-Shaped Body? You May Be More Susceptible to Binge Eating 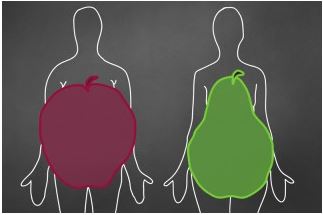 Newswise — Women with apple-shaped bodies – those who store more of their fat in their trunk and abdominal regions – may be at particular risk for the development of eating episodes during which they experience a sense of “loss of control,” according to a new study from Drexel University. The study also found that women with greater fat stores in their midsections reported being less satisfied with their bodies, which may contribute to loss-of-control eating.

This study marks the first investigation of the connections between fat distribution, body image disturbance and the development of disordered eating.

“Eating disorders that are detected early are much more likely to be successfully treated. Although existing eating disorder risk models comprehensively address psychological factors, we know of very few biologically-based factors that help us predict who may be more likely to develop eating disorder behaviors,” said lead author Laura Berner, PhD, who completed the research while pursuing a doctoral degree at Drexel.

“Our preliminary findings reveal that centralized fat distribution may be an important risk factor for the development of eating disturbance, specifically for loss-of-control eating,” said Berner. “This suggests that targeting individuals who store more of their fat in the midsection and adapting psychological interventions to focus specifically on body fat distribution could be beneficial for preventing eating disorders.

The study, titled “Examination of Central Body Fat Deposition as a Risk Factor for Loss-of-Control Eating,” was published in the American Journal of Clinical Nutrition.

Berner is now a postdoctoral research fellow at the Eating Disorders Center for Treatment and Research at UC San Diego Health. Michael R. Lowe, PhD, a professor in Drexel’s College of Arts and Sciences, was a co-author, along with Danielle Arigo, PhD, who was a postdoctoral research fellow at Drexel and is now an assistant professor of psychology at the University of Scranton; Laurel Mayer, MD, associate professor of clinical psychiatry at the Columbia University College of Physicians and Surgeons and the New York State Psychiatric Institute,; and David B. Sarwer, PhD, professor of psychology in Psychiatry and Surgery at the Perelman School of Medicine at the University of Pennsylvania as well as director of clinical services at the Center for Weight and Eating Disorders.

Mounting evidence suggests that experiencing a sense of loss-of-control during eating – feeling driven or compelled to keep eating or that stopping once one has started is difficult – is the most significant element of binge-eating episodes regardless of how much food is consumed, according to the researchers.

Using a large dataset that followed female college freshman for two years, the researchers preliminarily investigated whether body fat distribution is linked to body dissatisfaction over time and increases risk for the development or worsening of loss-of-control eating.

The nearly 300 young adult women completed assessments at baseline, six months and 24 months, that looked at height, weight and total body fat percentage and where it’s distributed. Participants, none of whom met the diagnostic criteria for eating disorders at the start of the study, were assessed for disordered eating behaviors through standardized clinical interviews in which experiences of sense of loss of control were self-reported.

In this sample, the researchers found that women with greater central fat stores, independent of total body mass and depression levels, were more likely to develop loss-of-control eating and demonstrated steadier increases in loss-of-control eating episode frequency over time. Women with a larger percentage of their body fat stored in the trunk region were also less satisfied with their bodies, regardless of their total weight or depression level.

The findings indicate that storage of body fat in trunk and abdominal regions, rather than elsewhere in the body, is more strongly predictive of loss-of-control eating development and worsening over time, and that larger percentages of fat stored in these central regions and body dissatisfaction may serve as maintenance or exacerbation for loss-of-control eating.

“Our results suggest that centralized fat deposition increased disordered eating risk above and beyond other known risk factors,” said Berner. “The specificity of our findings to centralized fat deposition was also surprising. For example, a one-unit increase in the percentage of body fat stored in the abdominal region was associated with a 53 percent increase in the risk of developing loss-of-control eating over the next two years, whereas total percentage body fat did not predict loss-of-control eating development.”

According to Berner, more research is needed to explain the mechanism behind these findings, though she speculates that there are a number of reasons why this might happen.

“It’s possible that this kind of fat distribution is not only psychologically distressing, but biologically influential through, for example, alterations in hunger and satiety signaling,” she said. “Fat cells release signals to the brain that influence how hungry or satiated we feel. Our study didn’t include hormone assays, so we can’t know for sure, but in theory it’s possible that if a centralized distribution of fat alters the hunger and satiety messages it sends, it could make a person feel out of control while eating.”

The findings may apply to other disordered eating behaviors beyond loss-of-control eating, but more research is needed. “Body fat distribution hasn’t been studied in disorders characterized by binge-eating behaviors as much as it has in anorexia nervosa,” said Berner. “The participants in our sample didn’t develop eating disorder diagnoses within the two year period that we studied them, but this study suggests that future research should investigate whether individuals with greater central fat stores are more likely to develop bulimia nervosa and binge eating disorder."