New Therapeutic Possibilities on the Horizon—Targeted Protein Destruction Made Better 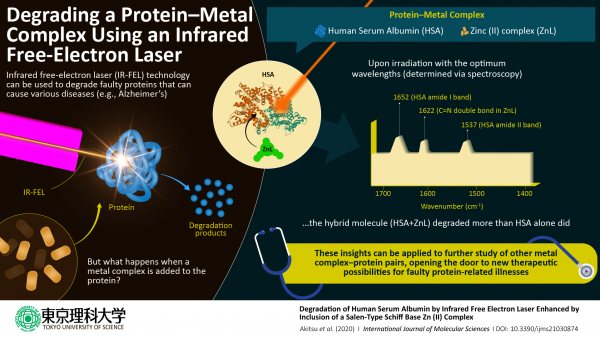 A team of scientists from Japan recently achieved more efficient degradation of the human serum albumin protein—an important protein in the blood—via high-intensity infrared irradiation, by attaching a zinc metal complex to the protein. Their findings indicate potential for future application of certain metal complexes to therapeutic interventions for diseases such as Alzheimer’s.

Artificial metalloenzymes are hybrid compounds that are synthesized by attaching metal complexes to protein molecules. In the past few years, these compounds have garnered considerable attention in research communities because of their applicability as bio-inspired catalysts, in biofuel cells, and in therapeutic interventions such as targeted protein degradation and drug delivery.

Advancing research on their application in targeted protein degradation, a team of scientists from the Tokyo University of Science, Japan, and Universidad Complutense de Madrid, Spain, examined the degradation of a specific metalloenzyme upon irradiation with high-energy infrared radiation. This metalloenzyme was one they had created by attaching a zinc metal complex (ZnL) to human serum albumin (HSA).

The use of high-energy infrared radiation to degrade proteins is not new. For instance, a previous study at the Tokyo University of Science used this technique to degrade several protein aggregates, including the protein aggregate whose buildup between neurons in the brain, called amyloid plaque, causes Alzheimer’s disease. What the present study finds, as Dr Takashiro Akitsu, lead scientist, explains, is that “when human serum albumin is conjugated with a zinc complex, protein damage is promoted upon irradiation with a mid-infrared free-electron laser.”

A mid-infrared free-electron laser (IR-FEL) is the instrument that the scientists used to irradiate the hybrid. The team of scientists comprising Prof Akitsu, Prof Koichi Tsukiyama, Dr Takayasu Kawasaki, and Assistant Prof Tomoyuki Haraguchi, among others, from Japan and Prof Mauricio A. Palafox from Complutense de Madrid, Spain, first used infrared (IR) spectroscopy to verify the attachment of ZnL to HSA. The IR spectra they obtained also indicated the optimal wavelengths for degradation: these were 1537, 1652, and 1622 cm-1, corresponding to the two amide bonds in HSA and the carbon-nitrogen double bond of ZnL, respectively.

The scientists created thin films of both the HSA and the HSA+ZnL hybrid and irradiated targeted portions of these films. They then compared the radiation damage caused by IR-FEL irradiation to the films, using a technique called Fourier transform infrared (FT-IR) microscopy and a program to evaluate changes in the protein secondary structure, called IR-SSE.

At 1622 cm-1, the HSA+ZnL hybrid structure did not dissociate. But, at the other two wavelengths, the protein structure of HSA, in both the pure HSA and hybrid forms, appeared significantly damaged. Further, in the latter cases, the hybrid compound was more degraded than pure HSA was. The scientists believe that the attachment of ZnL to the HSA protein destabilized the protein structure, allowing it to degrade more easily. Overall, this attachment of ZnL was feasible and assisted the degradation of the protein instead of alleviating it.

These results are presented in a paper published in the International Journal of Molecular Sciences, in which the scientists highlight that “at present, the exact binding mechanism between the complex and the protein is unknown.” Further, Prof Akitsu clarifies that “research on various protein-metal complex pairs is ongoing.” The findings of this study cannot yet be generalized and until scientists have better insights, the applications of such metal complex-protein hybrids in therapeutic interventions or other areas of biotechnology will remain limited.

Nevertheless, this study, in addition to the previous studies conducted at the Tokyo University of Science in this field, certainly makes us hopeful of a future in which diseases that involve protein defects, such as Alzheimer’s, are curable.

About the Tokyo University of Science

Tokyo University of Science (TUS) is a well-known and respected university, and the largest science-specialized private research university in Japan, with four campuses in central Tokyo and its suburbs and in Hokkaido. Established in 1881, the university has continually contributed to Japan's development in science through inculcating the love for science in researchers, technicians, and educators.

With a mission of “Creating science and technology for the harmonious development of nature, human beings, and society", TUS has undertaken a wide range of research from basic to applied science. TUS has embraced a multidisciplinary approach to research and undertaken intensive study in some of today's most vital fields. TUS is a meritocracy where the best in science is recognized and nurtured. It is the only private university in Japan that has produced a Nobel Prize winner and the only private university in Asia to produce Nobel Prize winners within the natural sciences field.

About Prof Takashiro Akitsu from the Tokyo University of Science

Takashiro Akitsu is a Professor at the Faculty of Science at Tokyo University of Science. As an active researcher in the field of inorganic chemistry, he focuses particularly on coordination chemistry and materials science. He has a PhD from Osaka University, having focused his post-graduate research on coordination, crystal and bioinorganic chemistry. He was named Professor of the Year in 2018 for his teaching work on biomaterials, and holds a patent for an ultraviolet absorber since 2016.

This research was supported by the Japanese Ministry of Education, Culture, Sports, Science and Technology, under the Photon Beam Platform Project.