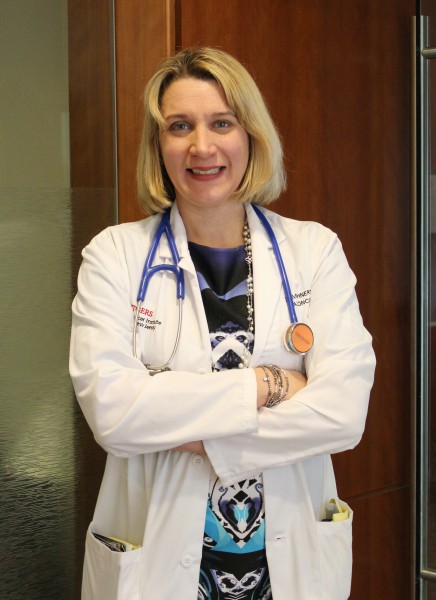 Newswise — New Brunswick, N.J. – April 27, 2020 – According to the National Cancer Institute, some 100,350 new cases of melanoma are expected in the U.S. this year with 6,850 deaths. Half of all melanoma cases have what is known as a BRAF mutation, and only about half of those treated with a BRAF-inhibitor (targeted therapy) respond to treatment.

Janice M. Mehnert, MD, director of the Phase I/Investigational Therapeutics Program at Rutgers Cancer Institute of New Jersey, and lead author Alain P. Algazi, MD, University of California San Francisco, are among the investigators. The research is being presented at the Opening Clinical Plenary Session of the virtual American Association for Cancer Research Annual Meeting, which was postponed as an in-person event this week due to COVID-19 concerns. Dr. Mehnert, who is also a medical oncologist in the Melanoma and Soft Tissue Oncology Program at Rutgers Cancer Institute and an associate professor at Rutgers Robert Wood Johnson Medical School, shares more about the work.

Q: What prompted you and your colleagues to focus on this work?

A:  A Nature paper in 2011 (Das Thakur, et al.) demonstrated that in mice, withdrawal of therapy was able to induce a partial regression of melanoma tumors, and alternating periods with and without drug prolonged the time that the treatments worked. This led us to wonder whether this could be a more effective approach toward both delaying resistance to therapy and to ameliorating toxicity in patients treated with targeted therapy. In other words, could less therapy be more effective in patients?

Q: Tell us about the study and how it was conducted.

A: The 206 eligible patients all underwent an eight week lead in of drug therapy. Patients were then randomized to go forward on a continuous schedule or to an intermittent schedule of three weeks on therapy followed by five weeks off therapy. This was a large and rigorous study. Patients were drawn from 68 centers over five years. Seventy percent of the patients had not been treated with immune checkpoint inhibitors previously.

Q: What did you find?

A: In patients treated on this trial, the median progression-free survival was statistically significantly longer, 9.0 months from randomization, versus intermittent dosing at 5.5 months. There was no difference in overall survival between the groups at a follow up of two years.

Q: What are next steps related to this work?

A: On the schedules tested in this trial, continuous therapy is the optimal choice of targeted therapy. This is at odds with what was seen in the laboratory and with a few smaller studies that indicate treatment breaks may have benefit. It’s possible that different schedules with shorter drug-free intervals could have produced a different result, but it's hard to test this in patients because the drugs are metabolized differently in people than in mice.  Given these results, continuous therapy remains the current standard of care.

A full author list, author disclosures and other information can be found at: https://www.abstractsonline.com/pp8/#!/9045/presentation/10595.