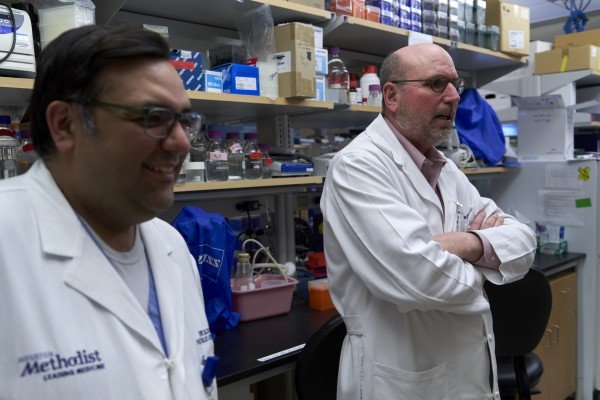 Newswise — The country’s first convalescent plasma transfusion trial results have been peer-reviewed and published, showing 19 out of 25 patients improving with the treatment and 11 discharged from the hospital. On March 28, Houston Methodist became the first academic medical center in the nation to transfuse plasma from recovered COVID-19 patients into two critically ill patients.

James M. Musser, M.D., Ph.D., chair of the Department of Pathology and Genomic Medicine at Houston Methodist, is the corresponding author on the study, titled “Treatment of COVID-19 patients with convalescent plasma.” Eric Salazar, M.D., Ph.D., assistant professor of pathology and genomic medicine with the Houston Methodist Research Institute, is the principal investigator who led the project to treat critically ill COVID-19 patients with convalescent plasma.

“While physician scientists around the world scrambled to test new drugs and treatments against the COVID-19 virus, convalescent serum therapy emerged as potentially one of the most promising strategies,” Musser said. “With no proven treatments or cures for COVID-19 patients, now was the time in our history to move ahead rapidly.”

Patients were first treated under emergency use guidelines (eIND) from the U.S. Food and Drug Administration and then received approval April 3 from the FDA to open up the trial to more patients as an investigational new drug (IND). This extraordinarily rapid approval granted by the FDA opened up access to convalescent plasma treatment for COVID-19 patients.

The century-old therapeutic approach dates back to at least as early as 1918 to fight the Spanish Flu and more recently was used with some success during the 2003 SARS pandemic, the 2009 influenza H1N1 pandemic and the 2015 Ebola outbreak in Africa. Following a study early on in the COVID-19 pandemic, where a handful of critically ill patients in China showed improvement, an interdisciplinary team of Houston Methodist physician scientists and health care workers rapidly targeted the COVID-19 virus with convalescent serum therapy.

Additional findings during this trial revealed patient outcomes following plasma therapy were very similar to recently published results of patients treated on a compassionate-use basis with the antiviral drug remdesivir. The research team also concluded that any observed complications were consistent with findings reported for COVID-19 disease progression and did not result from the plasma transfusions. The study’s overall findings were consistent with several other small case studies of convalescent plasma use for severe COVID-19 that have been recently reported.

Ultimately, although the convalescent plasma therapy administered on the front lines at Houston Methodist was implemented for emergency treatment, the study’s authors recognize the important need for controlled clinical trials to determine its therapeutic efficacy. A randomized controlled trial is currently being considered at Houston Methodist where they would also look more closely at variables such as timing of the transfusion after the onset of symptoms, the number and volume of transfusions adjusted for patient biometrics, antibody levels in donor plasma and numerous other parameters needed to effectively evaluate how to optimize this therapy. This would help address some questions, including whether patients would have better outcomes if plasma transfusions were administered sooner after the onset of symptoms.

Not all plasma recipients transfused so far at Houston Methodist were part of this first trial. Since late March, when the first patients were infused with convalescent plasma, Houston Methodist has treated 74 critically ill COVID-19 patients, 50 of whom have been discharged from the hospital and are recovering. More than 150 recovered COVID-19-infected individuals donated their plasma, many of them continuing to do so frequently.

AJP, an Elsevier journal, is the official journal of the American Society for Investigative Pathology and publishes high-quality original research reports, reviews and commentaries related to the molecular and cellular basis of disease.

Houston Methodist physician scientists (left to right) Eric Salazar, MD, PhD, and James M. Musser, MD, PhD, discuss their convalescent plasma trial for treating COVID-19, the results of which were the first in the U.S. to be peer-reviewed and published.