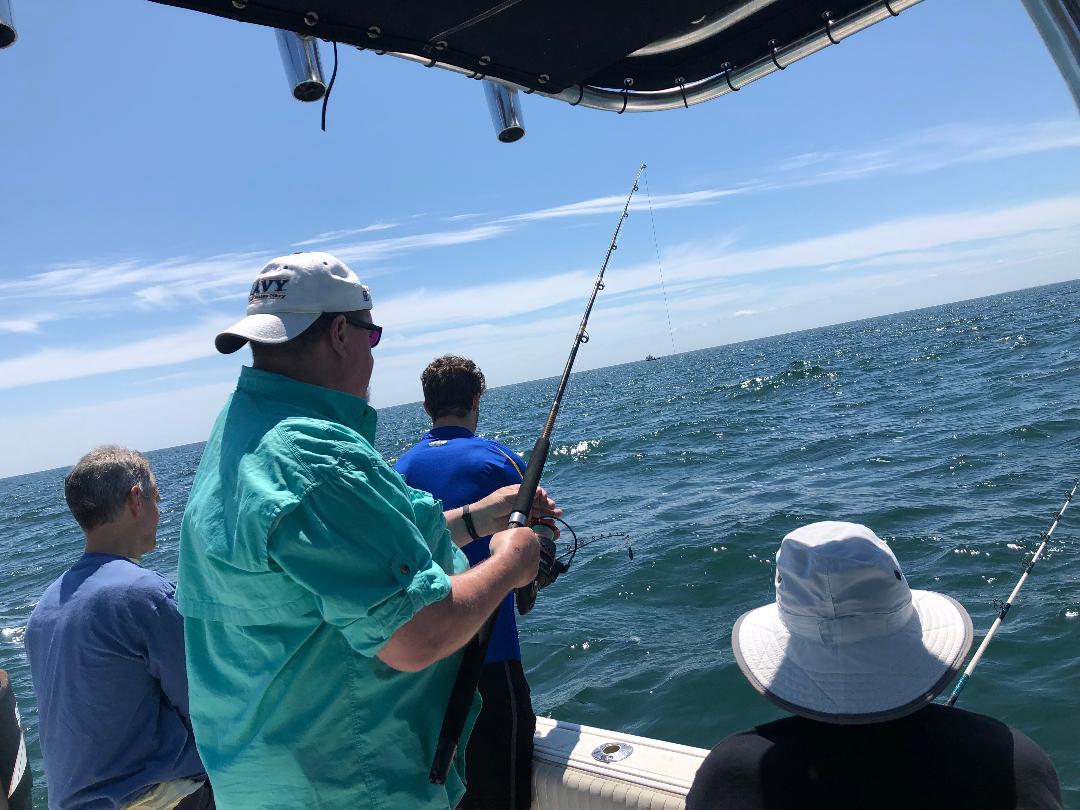 Sunlight reflects off the piercing blue waters of the Pawcatuck River.  Prismatic droplets decorate the hull of the vessel as beads of sweat form against sun-dried skin. Waves crash against the sides of the boat, forming mounds of white foam. The fishing line tenses as the rod rattles. This could be the big one. Captain Dan O’Malley and crew prepare for the catch.

Angler Dan’s Offshore Adventures offers an exciting fishing experience for those looking for some time on the sea. Captain Dan has over 30 years’ experience in deep sea fishing, while First Mate Joe Bouthot taps into his two decades of fishing to assist both captain and adventurers, alike. Together, they are committed to creating a safe, enjoyable charter fishing adventure for all guests.

With three different charter packages to choose from, there’s something for everyone. The in-shore charter package takes fishermen up to twenty miles out from the shore for either four or eight hours, where the bluefish, summer flounder, striped bass, porgy, winter flounder, and blackfish are just some of the catches that await.  He’s been doing this for a long time, and Captain Dan knows just where the sweet spots are located.

It wouldn’t be called Angler Dan’s Offshore Adventures if there wasn’t an offshore charter.  Over ten to twelve hours, adventurers can fish up to sixty-five miles out, where the catches are some of nature’s oldest predators. From a variety of tuna to mahi mahi, the fish are big and the fight is strong. An adventure of this nature is a true test of an angler’s skills and determination, but with Angler Dan at the helm, the experience is unforgettable.

Makos, smooth hammerheads, threshers, and blue sharks are just a few of the sharks found about sixty-five miles offshore. Angler Dan participates in the National Marine Fisheries Service (NMFS) Cooperative Shark Tagging Program, which is important to study the life of Atlantic sharks. Adventurous anglers can opt for a ten- to twelve-hour excursion to assist with implanting a dart tag near the shark’s first dorsal fin. One doesn’t spend as much time in the water as Angler Dan has without having a respect for the marine life. It’s through tagging programs such as the one Angler Dan’s Offshore Adventures provides that vital information such as stock identity, movement and migration, age and growth, mortality, and behavior of different species of sharks can be obtained.

Angler Dan also offers a young anglers summer program, which helps cultivate an early interest in charter fishing. Children ages ten and up learn not only different fishing techniques, but also important skills such as boating safety, sea life identification, and boat management. Captain Dan’s passion for fishing is ever apparent during his sessions with future fishing experts. From how to catch live bait to when to use which type of bait, Captain Dan’s got a lesson prepared.
At the end of the day, it’s about the adventure. Angler Dan and crew ensure every guest has a satisfactory experience from start to finish, whether it’s a four-hour trip or a twelve-hour tour. Fully licensed and insured, Angler Dan’s Offshore Adventures maintains the highest level of safety. Ready? The sea is calling.